Well, I received my new Microsoft Lumia 950 XL Windows Phone yesterday. Played with it all night (mostly setting it up). I have to say I’m very impressed with both the device, and the Windows 10 mobile operating system on mobile devices.

Let me start off by saying that I’ve actually had Windows 10 loaded up on my Lumia 1020 for the past week and a half (after hearing that the latest insider build is the same build that was shipping on the new Windows 10 devices). Jumping to Windows 10 absolutely rocked. The new operating system is a major step in moving forward in a mobile operating system for phones. I’ll get in to this later on in the article. 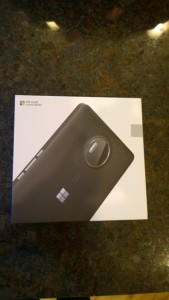 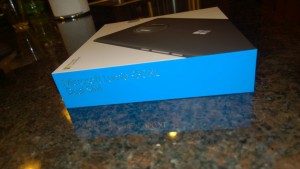 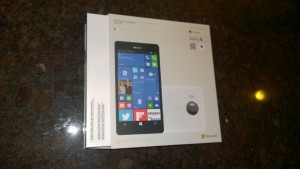 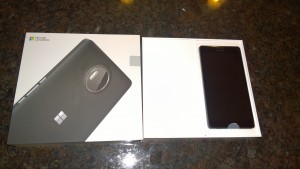 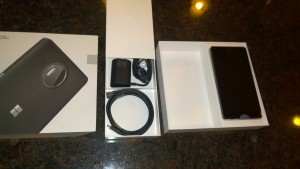 As you can see, they shipped me the Dual SIM variant of the device which was a nice surprise.

Opening the box, it was a very simplistic and nicely organized layout inside. One thing that I immediately noticed was no headphones/headset (which is somewhat surprising as Microsoft is really pushing their Groove Music service, along with Xbox Music Pass). Either way, I can probably use my Lumia 1020’s headphones. I’m sure there’s a ton of headsets available on the Microsoft Store as well.

First, the device feels absolutely lovely in your hands. I ordered the black, and it’s very sleek. The device has a massive screen, and a simple “Microsoft” logo at the top of it. The back has the Microsoft Logo, along with the PureView Zeiss markings, and of course the camera.

Back cover pops off (this took me a while as I didn’t want to break or damage any clips). I’m not sure how easy these break, but I would advise to take your time opening it to install the SIM as well as Micro SD card. One thing I noticed that was interesting, is how the buttons are mounted on the back of the case that pops off. The design shows promise in that if anything is broken, it should be easy to replace the back cover. It would be nice if Microsoft made these parts available for purchase for people who remove/replace these on a regular basis. I’m sure the buttons become a casualty. Under the cover you’ll find the Micro SD slot, 2 X SIM slots, and a replaceable battery (replaceable battery is a nice touch).

Plugging in the device, you go through the usual Windows Phone setup which has now been updated to Windows 10. You’ll notice the menu’s and interfaces are beautifully animated in simplistic ways that are pleasant for the user. I elected NOT to restore a backup, as I wanted to start from scratch (especially since my last backup was completed on a Insider Fast build). Give’s me a chance to start from scratch, chose the apps I want (discard ones I don’t use any longer), and setup new personalizations.

You’ll notice once completing the configuration wizard, the display is absolutely BEAUTIFUL! The display features a massive screen, with a high resolution that you can enable a view of more tiles if required (note, if you enable the “View more tiles” feature, the text size remains the same and may limit visibility of text displayed inside of tiles. This is not a problem, rather an observation).

-Texting/typing is super easy and pleasant now for people with big hands. I’ve been hating texting up to this point simply because I find it so hard to type on smaller screens. The 950XL screen size is perfect.

-Continuum (desktop experience powered by the phone when connected to video/keyboard/mouse) sounds promising. I have not tested this.

-Iris scanner built in for logging on to phone (no more PIN codes). I’ve been using this and absolutely love it!

-Major improvements to Microsoft Outlook, and now have the entire Microsoft Office suite on the device itself.

After spending a night and morning with it, this is my new favorite toy. I’ve so far had absolutely zero deal breaking issues with it, I will report back later on how battery life is.

There are 3 major things I want to discuss with this device:

This truly is the next step not only for the desktop based operating system, but for mobile devices as well. Numerous improvements can be seen in this OS both on the desktop and mobile platform. What’s really interesting is how Microsoft is converging these platforms and almost essentially merging them both in to one thing, while identifying and maintaining the actual usages for the device that is running the OS, Windows 10.

Going specifically in to phone devices, Microsoft has truly has taken it’s own path in to what it believes the most user friendly mobile platform should be. In my opinion, I think they have hit it dead on. The operating system focuses both on ease of use, and the usual simple little dumb apps that are used for simple tasks in ones personal life, but at the same time is a very powerful tool for both business usage, along with keeping one connected, integrated, and in touch with things that are important for both business and life.

Cortana is a move with Windows 10 to provide an assistant of which most think it compares/competes with Siri on Apple’s iPhone, but while it does compete, she’s actually a total different gal! Cortana integrates all of ones Windows 10 devices, providing an assistant to life, as well as with the integration among devices. This provides someone with an interface to all their data, devices, and technologies behind each of the devices, to any outlet/device that runs Cortana. We are slowly seeing these technologies being introduced and enabled, I think it’s just the beginning of something great!

Microsoft is pushing for developers of Windows 10 apps, to provide design that allows the app to run fluidly among both desktop and mobile platforms. This allows a single app to be installed and ran on both platforms, allowing users to have a converged experience on both their desktop and mobile devices. This means your apps, data, and uses are seamless in changing devices. This essentially allows you to do whatever you need to do, on any of your devices.

Ultimately, you’ve got more than “just a phone” in your hand! You have a device that can do whatever you want, whenever you want! You could say Windows 10 is your window to the world! I know it’s cheesy, but it came to mind and holds true.

One thing I wasn’t aware of getting with this device, was the Iris scanner. While setting up the phone, it prompted to configure this and I thought, “There’s no way this phone has an Iris scanner”… Well, it does! Configured, and did about 20 scans of my Iris to improve the authentication mechanism. It works great, and is very comfortable and quick to use when signing in to your phone! I’m curious to know exactly how accurate this is, also where the Iris data is being stored.

Traditionally I’ve always used a PIN, and set up time-outs for authentication appropriately, but have still had issues with friends getting their hands on my device in between the security time out. With this new Iris scanning authentication, I’ve prompted to require it every time the device is used.

Great technology! I’ve been using fingerprint scanners on my Lenovo laptops for some time, and love the feature. However, Iris authentication is taking it a whole step further. Question is, where can I buy an Iris scanner for my desktop?

Make sure you do tons of scans in different lighting, different angles, and make sure you’re looking in different directions so it can fully map your Iris. This will make signing in to the device that much easier.

App availability for Windows 10 (or Windows Phone in general)

With all this power, flexibility, and technology, the only disappointment is that more 3rd party developers aren’t developing their applications for the Windows 10 platform. While the phone has everything I need built in for business, I do use quite a few apps for personal uses. The kicker is, is that most of the apps are not developed by the actual company, but by 3rd parties (one example being 6tag for Instagram access). It would be nice for 3rd party companies to take notice to the Windows platform and embrace it, especially with what it has to offer.

I’ve said this before many times, Microsoft hasn’t marketed any of their Windows Phones well, going back all the way to Windows Mobile days. There has been more adoption in the United States due to events, marketing promo’s, etc… However in Canada I feel there is still a lack of marketing being done.

Essentially, I believe there needs to be 3 separate initiatives. One for business apps, one for personal/consumer, and finally app development.

Microsoft needs to partner with more partners, hold more events, and really work on their relationships with phone providers. It also wouldn’t hurt to provide funding to some 3rd party companies to push Windows app development (this has been done in the past by Nokia and Microsoft as far as I know, however a lot of apps that were created from this haven’t been updated in some time).

Now that there is a new flagship Lumia (The Lumia 950 XL), it will be getting out in the hands of the people, but we need apps!

This device is kick ass. I’d totally recommend it!

Nokia Canada has this awesome Facebook contest running right now where if you describe the new Lumia 1020 in one word, you can win a Lumia 1020 prize pack which includes:

I’m TOTALLY excited about the phone. I’ve been harassing my Rogers reps for a while wondering when I can pre-order a 1020. This is just icing on the cake baby!

Once I get my hands on it, I’ll be writing an in-depth review on the device. I already have the feeling I’m going to love it! 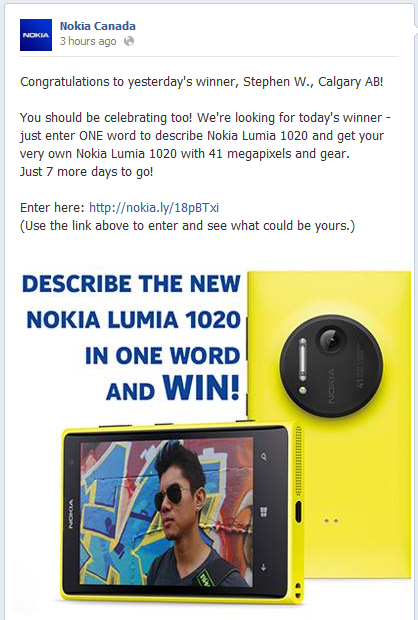