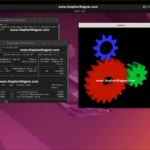 The official documentation from VMware is helpful, but unfortunately doesn’t provide all the information to get up and running quickly, which is why I’ve put together this guide as a “Quick Start”.

Please note, that this is just a guide to get to the point where you can install NVIDIA vGPU drivers and have installed the Horizon Agent for Linux on the VM. This will provide you with a persistent VM that you can use with Horizon, and the instructions can be adapted for use in a non-persistent instant clone environment as well.

I highly recommend reading VMware’s documentation for Linux Desktops and Applications in Horizon.

You should now be able to connect to the Ubuntu Linux VDI VM using the VMware Horizon client. Additionally, if you installed the vGPU drivers for NVIDIA vGPU, you should have full 3D acceleration and functionality.

In this post, I’m going to provide instructions and a guide on how to install the Horizon Agent for Linux on Ubuntu 20.04 LTS. This will allow you to run and connect to an Ubuntu VDI VM with VMware Horizon View.

In the past I’ve created instructions on how to do this on earlier versions of Ubuntu, as well as RedHat Linux, but it’s getting easier than ever and requires less steps than previous guides.

I decided to create the updated tutorial after purchasing an AMD S7150 x2 and wanted to get it up and running with Ubuntu 20.04 LTS and see if it works.

I also highly recommend reading the documentation made available for VMware Horizon: Setting Up Linux Desktops in Horizon.

And that’s it, you should now be running.

As for the AMD S7150 x2, I noticed that Ubuntu 20.04 LTS came with the drivers for it called “amdgpu”. Please note that this driver does not work with VMware Horizon View. After installing “mesa-utils”, running “glxgears” and “glxinfo” it did appear that 3D Acceleration was working, however after further investigation it turned out this is CPU rendering and not using the S7150 x2 GPU.

You now have a VDI VM running Ubuntu Linux on VMware Horizon View.

This is due to a video mode issue that causes the system to halt or freeze. It’s much like the issue I described here on a Fedora Linux system.

To get the system to boot:

To permanently resolve the issue:

Please Note: Always make sure you have a full system backup before modifying any system files!

You’re trying to install Ubuntu on your computer, but it freezes due to lack of resources, specifically memory. This can happen when you’re trying to re-purpose old laptops, netbooks, etc.

This recently happened to met as I tried to install Ubuntu on an old HP Netbook. Originally I used Fedora, but had to switch to Ubuntu due to library issues (I wanted to use the VMware Horizon Client on it).

Unfortunately, when I’d kick off the USB installer, the OS would completely freeze (mouse either unresponsive, or extremely glitchy).

In the ~5 minutes where the system is operable, I used the key sequence “CTRL + ALT + F2” to get to a text tty console session. From here I noticed the system eventually uses all the RAM and maxes out the memory. When this occurs, this is when the system becomes unresponsive.

Since this is a Live CD installer, there is no swap file for the system to use once the RAM has filled up.

To fix this and workaround the problem, I grabbed a second blank USB stick and used it as an external swap file. Using this allowed me to run the installer, complete the installer, and successfully install Ubuntu.

Please make sure you are choosing the right device names in the instructions below. Choosing the wrong device name can cause your to write to the wrong USB stick, or worse the hard drive of your system.

This should also work for other Linux distributions, as I have also used this in the past with Fedora (on a Single Board Computer with almost no RAM).

During the install process where the Ubuntu installer formats your hard drive, the install will actually mount the hard drive swap file as well (it’ll use both). Once the installer is complete, shut down the system and remove the USB SWAP stick.