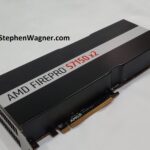 The AMD S7150 x2 PCIe MxGPU is a Graphics card designed for multi-user (MxGPU) virtualized environments (VDI). Installing an AMD S7150 x2 MxGPU allows you to provision virtual GPUs to Virtual workstations to enable 3D acceleration for applications like engineering, gaming, or pretty much anything that requires accelerated graphics.

Being a big fan of VDI and having my own VDI homelab, I just had to get my hands on one of these cards to experiment with, and learn. It’s an older card that was released in February of 2016, but it’s perfect for the homelab enthusiast.

I secured one and here’s a story about how I got it working on an unsupported 1U HPE DL360p Gen8 Server.

For cooling, the S7150x2 requires the server to cool the card (it has no active cooling or fans), whereas the S7150 is available as both active (with fan) cooling, and passive cooling.

This card supports older versions of VMware ESXi 6.5 and also some versions of Citrix XenServer.

The AMD MxGPU technology, uses a technology called SR-IOV to create Virtual Functions (VFs) that can be attached to virtual machines.

Please Note: In order to use MxGPU capabilities, you must have a server that supports SR-IOV and be using a version of VMware that is compatible with the MxGPU drivers and configuration utility.

The AMD FirePro S7150 x2 does not have any video-out connectors or ports, this card is strictly designed to be used in virtual environments.

As most of you know, I maintain a homelab for training, learning, testing, and demo purposes. I’ve had the S7150 x2 for about 7 months or so, but haven’t been able to use it because I don’t have the proper server.

Securing the proper server is out of the question due to the expense as I fund the majority of my homelab myself, and no vendor has offered to provide me with a server yet (hint hint, nudge nudge).

I do have a HPE ML310e Gen8 v2 server that had an NVidia Grid K1 card which can physically fit and cool the S7150 x2, however it’s an entry-level server and there’s bugs and issues with PCIe passthrough. This means both vDGA and MxGPU are both out of the question.

All I have left are 2 x HPE DL360P Gen 8 Servers. They don’t fit double width PCIe cards, they aren’t on the supported list, and they can’t power the card, but HEY, I’m going to make this work!

I realized that when the cable came in contact with the metal frame, it actually peeled the rubber off the ribbon cable (very sharp), so be careful if you attempt this. Thankfully the cable is shielded and I didn’t cause any damage.

Cooling the card was one of the most difficult tasks. I couldn’t actually even test this card when I first purchased it, because after powering up a computer, the card would instantly get up to extremely hot temperatures. This forced me to power down the system before the OS even booted.

I purchased a couple 3D printed cooling kits off eBay, but unfortunately none worked as they were for Nvidia cards. Finally one day I randomly checked, and I finally found a 3D printed cooling solution specifically for the AMD S7150 x2.

As you can see, the kit included a 3D printed air baffle and a fan. I had to remove the metal holding bracket to install the air baffle.

I also had to purchase a PWM fan control module, as the fan included with the kit runs at 18,000 RPM. The exact item I purchased was a “Noctua NA-FC1, 4-Pin PWM Fan Controller”.

Once I installed the controller, I was able to run some tests adjusting the RPM while monitoring the temperatures of the card, and got the fan to a speed where it wasn’t audible, yet was able to cool and keep the GPUs between 40-51 degrees Celsius.

The next problem I had to overcome was to power the card with it being external.

To do this, I purchased a Gigabyte P750GM Modular Power Supply. I chose this specific PSU because it’s modular and I only had to install the cables I required (being the 6-pin power cable, 8-pin power cable, ATX Power Cable (for PSU on switch), and a CFM fan power connector).

As you can see in the picture below, I did not install all the cabling in the PSU.

As you can see, if came together quite nicely. I also had to purchase an ATX power on adapter, to short certain pins to power on the PSU.

I fed this cable under the PSU and it is hanging underneath the desk out of the way. Some day I might make my own adapter, so I can remove the ATX power connector but unfortunately the PIN-outs on the PSU don’t match the end of the ATX connector cable.

It’s about as neat and tidy as it can be, being a hacked up solution.

Overall, by the time I was done connecting it to the server, I was pretty happy with the cleaned up final result.

After booting the system, I noticed that VMware ESXi 6.5 detected the card and both GPUs.

Before I started to play around with the MxGPU software, I wanted to simply pass through an entire GPU to a VM for testing. I enabled ESXi Passthru on both GPUs, and restarted the server.

So far so good!

I already had a persistent VDI VM configured and ready to go, so I edited the VM properties, and attached one of the AMD S7150 x2 GPUs to the VM.

Booting the VM I was able to see the card and I installed the AMD Radeon FirePro drivers. Everything just worked! “dxdiag” was showing full 3D acceleration, and I confirmed that hardware h.264 offload with the VMware Horizon Agent was functioning (confirmed via BLAST session logs).

Now on to the issues. After spending numerous days, I was unable to get the MxGPU features working with the AMD Radeon FirePro drivers for VMware ESXi. However, thanks for a reader named TonyJr, I was able to solve this, but more on that later (keep reading).

Even though I had the drivers and the scripts installed, it was unable to create the VFs (Virtual Functions) with SR-IOV. From research on the internet with the limited amount of information there is, I came to believe that this is due to an SR-IOV bug on the Gen8 platform that I’m running (remember, this is completely and utterly NOT SUPPORTED).

If anyone is interested, the commands worked and the drivers loaded, but it just never created the functions on reboot. I also tried using the newer drivers for the V340 card, with no luck as the module wouldn’t even load.

Here is an example of the configuration script:

And as mentioned, on reboot I would only be left with the actual 2 physical GPUs available for passthru.

I also tried using “esxcfg-module” utility to configure the driver, but that didn’t work either.

Both combinations failed to have any effect on creating the VFs. It was unfortunate, but I still had 2 separate GPUs that I could able to passthrough to 2 VDI VMs which is more than enough for me.

Thanks to “TonyJr” leaving a comment, I was able to get the MxGPU drivers functioning on the ESXi host.

To get SR-IOV and the drivers to function, I had to perform the following:

Upon reboot, the ESXi instance had actually already sliced up the S7150 MxGPU using the options I tried configuring above. It’s all working now!

Ultimately I tweaked the settings to only slice one of the two GPUs in to 2 VFs, leaving me with a full GPU for passthrough, as well as 2 VFs from the other GPU. Thanks TonyJr!

Right off the bat, I have to say this works AMAZING! I’ve been using this for about 4 weeks now without any issues (and no fires, lol).

As mentioned above, because of my issues with SR-IOV on the server I couldn’t utilize MxGPU, but I do have 2 full GPUs each with 8GB of VRAM each that I can passthrough to VDI Virtual Machines using vDGA. Let’s get in to the experience…

Similar to the experience with the Nvidia GRID K1 card, the S7150 x2 provides powerful 3D acceleration and GPU functionality to Windows VDI VMs. Animations, rendering, gaming, it all works and it’s all 3D accelerated!

I’ve even tested the S7150 x2 with my video editing software to edit and encode videos. No complaints and it works just like a desktop system with a high performance GPU would. Imagine video editing on the road with nothing but a cheap laptop and the VMware Horizon client software!

The card also offloads encoding of the VMware BLAST h.264 stream from the CPU to the GPU. This is what actually compresses the video display feed that goes from the VM to your VMware View client. This provides a smoother experience with no delay or lag, and frees up a ton of CPU cycles. Traditionally without a GPU to offload the encoding, the h.264 BLAST stream uses up a lot of CPU resources and bogs down the VDI VM (and the server it’s running on).

Unfortunately, I don’t have any engineering, mapping, or business applications to test with, that this card was actually designed for, but you have to remember this card was designed to provide VDI users with a powerful workstation experience.

It would be amazing if AMD (and other vendors) released more cards that could provide these capabilities, both for the enterprise as well as enthusiasts and their homelab.