Recently, I’ve started to have some issues with the HP MSA20 units attached to my SAN server at my office. These MSA20 units stored all my Virtual Machines inside of a VMFS filesystem which was presented to my vSphere cluster hosts over iSCSI using Lio-Target. In the last while, these logical drive has just been randomly disappearing, causing my 16+ virtual machines to just halt. This always requires me to shut off the physical hosts, shut off the SAN server, shut off the MSA20s, and bring everything all the way back up. This causes huge amounts of downtime, and it just a pain in the butt…

I decided it was time for me to re-do my storage system. Preferably, I would have purchased a couple HP MSA60s and P800 controllers to hook it up to my SAN server, but unfortunately right now it’s not in the budget.

A few years ago, I started using software RAID. In the past I was absolutely scared of it, thought it was complete crap, and would never have touched it, but my opinion drastically changed after playing with it, and regularly using it. While I still recommend businesses to use Hardware based RAID systems, especially for mission critical applications, I felt I could try out software RAID for the above situation since it’s more of a “hobby” setup.

I read that most storage enthusiasts use either the Super Micro AOC-SASLP-MV8, or the LSI SAS 9211-8i. Both are based off different chipsets (both of which are widely used in other well known cards), and both have their own pro’s and con’s.

During my research, I noticed a lot of people who run Windows Home Server were utilizing the AOC Super Micro Card. And while using WHS, most reported no issues whatsoever, however it was a different story when reading posts/blog articles from people using Linux. I don’t know how accurate this was, but apperently a lot of people had issues with this card under heavy load, and some just couldn’t get it running inside of linux.

Then there is the LSA 9211-8i (which is the same as the extremely popular IBM M1015). This bad boy supports basic RAID operations (1, 0, 10), but most people use it with JBOD and simply use Linux MD Software RAID. While there was numerous complaints about users having issues with their systems even detecting their card, other users also reported issues caused by the BIOS of this card (too much memory for the system to boot). When people did get this card working though, I read of mostly NO issues under Linux. Spent a few days confirming what I already had read and finally decided to make the purchase.

Both cards support SAS/SATA, however the LSI card supports 6Gb/sec SAS/SATA. Both also have 2 internal SFF8087 Mini-SAS connectors to hook up a total of 8 drives directly, or more using an SAS expander. The LSI card uses a PCIe (V.2) 8x slot, vs the AOC-SASLP which uses PCIe (V.1) 4x slot.

I went to NCIX.com and ordered the LSI 9211-8i along with 2 breakout cables (Card Part#: LSI00194, Cable Part#: CBL-SFF8087OCF-06M). This would allow me to hook up a total of 8 drives (even though I only plan to use 5). I already have an old computer I already use with an eSATA connector to a Sans Digital SATA Expander for NFS, etc… that I plan on installing the card in to. I also have an old Startech SATABAY5BK enclosure which will hold the drives and connect to the controller. Finished case: 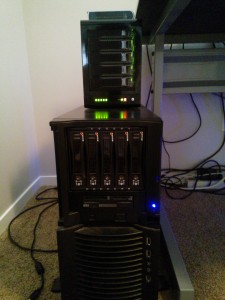 (At this point I have the enclosure installed along with 5 X 1TB Seagate 7200.12 Barracuda drives)

Finally the controller showed up from NCIX: 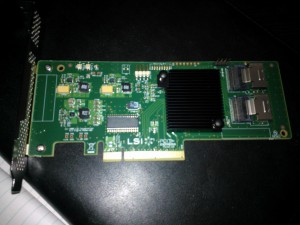 I popped this card in the computer (which unfortunately only had PCIe V1), and connected the cables! This is when I ran in to a few issues…

-If no drives were connected, the system would boot and I could succesfully boot to CentOS 6.

-If at all I pressed CTRL+C to get in to the cards interface, the system would freeze during BIOS POST.

-If any drives were connected and detected by the cards BIOS, the system would freeze during BIOS POST.

I went ahead and booted in to CentOS 6. Downloaded the updated firmware and BIOS and flashed the card. The flashing manual was insane, but had to read it all to make sure I didn’t break anything. First I updated both the firmware and BIOS (which went ok), however I couldn’t convert the card from IR firmware to IT firmware due to errors. I google’d this and came up with a bunch of articles, but this one: http://brycv.com/blog/2012/flashing-it-firmware-to-lsi-sas9211-8i/ was the only one that helped and pointed me in the right direction. Essentially just stating you have to use the DOS flasher, erase the card (MAKING SURE NOT TO REBOOT OR YOU’D BRICK IT), and then flashing the IT Firmware. This worked for me, check out his post! Thanks Bryan!

Anyways, after updating the card and converting it to the IT firmware. I still had the BIOS issue. I tried the card in another system, and still had a bunch of issues. I finally removed 1 of 2 video cards and populated the card in a Video Card slot, and I finally could get in to the BIOS. First I enabled staggered spin-up (to make sure I don’t blow the PSU on the computer with a bunch of drives starting up at once), changed some other settings to optimize, and finally disabled the boot BIOS, and changed the option for the adapter to be disabled for boot, and only available to the OS. When removing the card, and putting it in the target computer, this worked. Also noticed that the staggered spin-up started during the Linux kernel startup when initializing the card. Here’s a copy of the kernel log:

SUCCESS! Lot’s of SUCCESS! Just the way I like it! Haha, card intialized, had access to drives, etc…

Configured the RAID 5 Array using a 256kb chunk size. I also changed the “stripe_cache_size” to 2048 (the system has 4GB of RAM) to increase the RAID 5 performance.

At this point I simply formatted the drive using EXT4. Configured some folders, NFS exports, and then used Storage vMotion to migrate the Virtual Machines from the iSCSI target, to the new RAID5 array (currently using NFS). The main priority right now was to get the VMs off the MSA20 so I could at least create a backup after they have been moved. Next step, I’ll be re-doing the RAID5 array, configuring the md0 device as a iSCSI target using Lio-Target, and formatting it with VMFS. The performance of this Software RAID5 array is already blowing the MSA20 out of the water!

So there you have it! Feel free to post a comment if you have any questions or need any specifics. This setup is rocking away now under high I/O with absolutely no problems whatsoever. I think I may go purchase another 1-2 of these cards!