I went to re-deploy some vDP appliances today and noticed a newer version was made available a few months ago (vSphere Data Protection 6.1.5). After downloading the vSphereDataProtection-6.1.5.ova file, I went to deploy it to my vSphere cluster and it failed due to an invalid certificate and a message reading “The OVF package is signed with an invalid certificate”.

I went ahead and downloaded the certificate to see what was wrong with it. While the publisher was valid, the certificate was only valid from September 5th, 2016 to September 7th, 2017, and today was October 27th, 2017. It looks like the guys at VMware should have generated a new cert before releasing it. 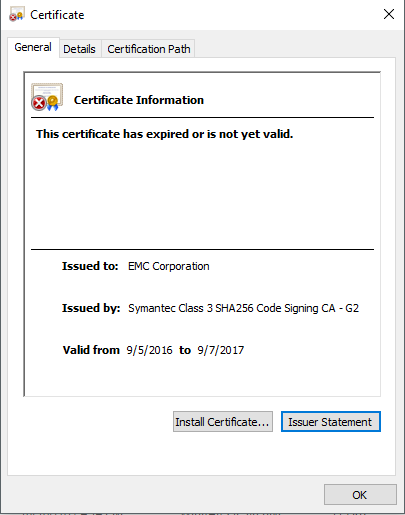 To resolve this, you need to repackage the OVA file and skip the certificate using the VMware Open Virtualization Format Tool (ovftool) available at https://code.vmware.com/tool/ovf/4.1.0

Once you download and install this, the executable can be found in your Program Files\VMware\VMware OVF Tool folder.

Open a command prompt and change to the above directory and run the following:

This command will repackage and remove the certificate from the OVA and save it as the new file named vdpgood.ova above. Afterwards deploy it to your vSphere environment and all should be working!