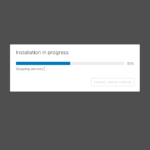 Pre-update checks done prior to the update will pass and allow you to proceed, however it’s the installation that will fail and crash reporting this error.

After the installation fails, you will no longer be able to log in to the vCSA VAMI reporting the error “Unable to Login” using the root account.

You are able to login via SSH. Resetting the root password via SSH will not resolve this issue.

Further troubleshooting, it appears that special characters in the root password such as “!”, “.”, and “@” caused this issue to occur in my environment.

I was not able to fix the broken vCSA after the failed update. Access to the vCSA was not possible, however vCenter functions were still operating.

To resolve this situation in my environment, I restored a snapshot of the vCSA taken prior to updating.

After restoring the snapshot, I changed the root password for VAMI and restarted the vCSA.

Another snapshot was taken prior to attempting the upgrade, which was now succesfull after removing special characters out of the root password.