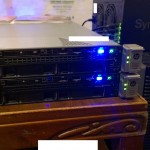 With VMware ESXi 6.5 and 6.7 going End of Life on October 15th, 2022, many of you are looking for options to update hosts in your homelab, especially in my case putting ESXi 7.0 on HP Proliant DL360p Gen8 servers.

As far as support goes, HPE last provided a custom installer for ESXi for versions 6.5 U3 which was released December of 2019. This was the “last Pre-Gen9 custom image” released, as ESXi 7.0 on the DL360p Gen8 is totally unsupported.

ESXi 6.7 or higher on the Gen8 Servers

The jump from 6.5 to 6.7 was a little easier, as you could use the 6.5 custom installer, and then upgrade to 6.7. For the most part, as long as the hardware itself was supported, you were in pretty good shape.

Additionally, with the HPE vibsdepot loaded in to VMware Update Manager (now known as Lifecycle Manager), you could also keep all the HPE drivers and agents up to date.

Some were lucky enough to upgrade their current installs to 7 with no or limited problems, however the general consensus online was to expect problems. There were some major driver changes, which I think at one point led to an advisory to perform a fresh install, even if you had a fully supported configuration with newer generation servers such as the Proliant Gen9 and Gen10 servers, when upgrading from older versions.

In my setup, I have the following:

My main concern is to not only have a stable and functioning ESXi 7 instance, but I also, if possible would like to have the HPE drivers, agents, and integrations with iLO.

You must consider that while this is completely unsupported, you do need to make sure that the components of your current configuration are supported, such as the processor and PCIe cards, even if the server as a whole is not supported.

Make sure you reference your hardware on the VMware Compatibility Guide (HCL).

I was able to install ESXi 7.0 on my HPE Proliant Gen8 servers, by performing the following steps.

You’ll now have a functioning instance.

In my case everything was working, except for the “Smart Array P420i” RAID Controller, which I don’t use anyways.

Additionally, if you have a vCenter instance running, make sure that you add the HPE vibsdepot repo to your Lifecycle Manager. After you add the repo, create a baseline, and attach the baseline to the host, go ahead and proceed to scan, stage, and remediate the server which will then further update all the HPE specific drivers and software.