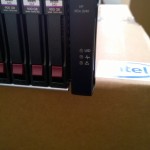 First some info on the setup:

-2 vDisks are configured, each owned by a separate controller

-While round robin is configured, only one optimized path exists (only one path is being used) for each host to the datastore I tested

-Running 2 “VMWare I/O Analyzer” VMs as worker processes. Both workers are testing at the same time, testing the same datastore.

Please note: The MaxIOPS and MaxWriteIOPS workloads were used. These workloads don’t have any randomness, so I’m assuming the cache module answered all the I/O requests, however I could be wrong. Tests were run for 120 seconds. What this means is that this is more of a test of what the controller is capable of handling itself over a single 10Gb link from the controller to the host.

-These benchmarks were done by 2 seperate worker processes (1 running on each ESXi host) accessing the same datastore.

-I was running a VMWare vDP replication in the background (My bad, I know…).

-Sum is combined throughput of both hosts, Average is per host throughput.

Holy crap this is fast! I’m betting the speed limit I’m hitting is the 10Gb interface. I need to get some more paths setup to the SAN!