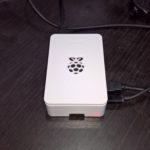 There are many guides on the internet on how to write a Raspberry Pi image (which includes the system-boot partition), but I wanted a clean and fresh partition layout, without the additional partitions containing the Linux operating system.

I was creating a new Micro SD card with the purpose of using an NFS Root for the Raspberry Pi. For those of you that don’t know, you can boot a Raspberry Pi (or Linux computer) from local media, whether it’s a CD, USB Stick, Micro SD, or hard drive, and then have the actual operating system root file system be loaded via NFS. You can also use PXE to boot the kernel requiring no local storage, but that’s beyond the scope of this article.

Below, we’ll look at the default partition layout you’d see on a Raspberry Pi using a prebuild linux image.

I’m using a USB to Micro SD adapter to view the partitions on this card, so it’s being presented to the system as “/dev/sda”. On a normal computer “/dev/sda” is the first hard drive (usually the OS) so be careful when using these commands.

The second partition which is the filesystem root (which I moved to NFS), is “/dev/sda2”, with an Id of 83, and has a type of “Linux”.

Creating a fresh partition layout with only the boot partition

In this guide we’re going to setup a Micro SD card with a fresh boot partition for the Raspberry Pi from scratch. We are not using an image and we are not using the expansion feature.

We’re going to assume that your destination SD card is empty. If it isn’t, you’ll need to delete all the partitions using “fdisk /dev/device”, and then deleted them with “d”.

Alternatively, to delete existing partition information you can wipe the MBR and partition table with the following command. Replace “/dev/device” with the actual device label for the card. Note that this will render existing data useless and unrecoverable.

Please Note: Make sure you are running this command on the right device. Afterwards, unplug and re-insert the SD card.

On an empty Micro SD card:

Finally, you can now set a label to the partition. Ubuntu uses the label “system-boot” whereas Raspbian uses “boot”. You can set it with the following command:

You now have a clean partition layout that can be used to boot a Raspberry Pi. Remember that this is just the partition layout and the files are still needed from an image or your current running instance. These can simply be copied over.

In my case, I just mounted an old and the new partitions to directories and copied the data over. This allowed me to modify the new boot partition and ultimately make it boot in to an NFS root.

One Response to “Create Boot Partition Layout for a Raspberry Pi”